Alleged animal abuse in US dairy sector under investigation

Evidence of what appears to be aggressive animal abuse, practices leading to heightened disease risk and cows being passed off as organic at a Texan auctioneers has been presented to the US Department of Agriculture (USDA) by undercover welfare investigators. A second, separate abuse investigation at a dairy farm is on its way to court in California.

The allegations come at a time of upheaval for US dairy. The first half of 2020 was blighted by Covid-19-related milk dumping, 10-year price lows and a slump in demand from schools and restaurants.

But by July, a combination of stay-at-home orders, financial handouts to US citizens and government food program purchasing saw the spot cheddar price, a key dairy indicator, set a record high of $3 (GBP2.30) a pound, according to Tom Bailey, a senior US dairy market analyst at Rabobank.

The first investigation centres on Texan auctioneers, Erath County Dairy Sales (ECDS). Undercover video footage filmed at ECDS between January and March 2020, and released online on Thursday, was delivered to the USDA by the US-Brazil based NGO, Strategies for Ethical and Environmental Development (Seed). 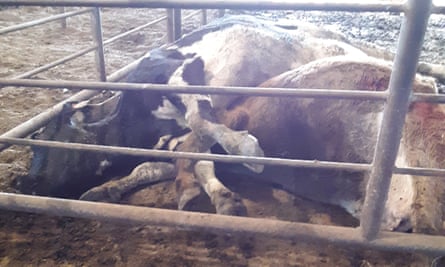 In one video, the undercover investigator, hired as an animal handler, is told that removing a cow’s ear tags, and replacing them with new “back tags” that indicate a cow is organic, can triple or quadruple their meat sale value.

In another clip, the investigator films himself collecting ear tags from the ground. In a third, the undercover operative is told: “Out-of-state cows come in, they turn into Texas cows when they leave.”

The investigator said he witnessed the tag switching process. First, a bladed tool was used to remove the ear tags, which are part of the USDA’s animal disease traceability framework. These tags were not replaced. Instead, another tag, known as a back tag or sticker, was glued to the cow’s back. The stickers indicate the cow is organic and from Texas. 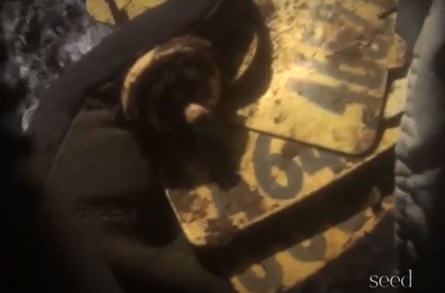 Removing ID tags from a cow’s ear breaks the link with the animal’s health and veterinary history, the investigator told the Guardian.

A Seed spokesperson said the tags were designed to control disease transmission risks – between animals and from animals to humans – linked to factory farms and the movement of animals from farms to auction and slaughterhouses.

The investigator said one of his greatest concerns was consumers. “I’d imagine people buying this meat with zero traceability, and no idea where it came from, regardless of what’s on the label.”

The footage also appears to show a cow being kicked in the head and neck area, overcrowded transport conditions, cows with sore legs, or shaking on the ground and lying in puddles, a downed animal repeatedly shocked with a cattle prod and sick and dying cows dumped in a pile together.

ECDS’s majority stockholder and president, Jimmy G Beyer, did not respond to phone calls, messages or emails (via his son) requesting comment. The person answering the phone at the company eventually asked the Guardian to stop calling.

A lawyer for California-based NGO, Animal Legal Defense Fund, said she was “not too surprised” by the tag switching accusations. “We have seen this type of thing before,” said Kelsey Eberly. She fears the practice is “more common” than people would expect, mainly “because the price premium is so much higher” for organic and better welfare meat and dairy.

Eberly is currently taking legal action against the California-based Dick Van Dam Dairy, accusing it of systemic abuse. The lawsuit, filed on 30 September with the California superior court for Riverside County, is based on undercover video footage filmed by Animal Outlook in November 2019.

The video is narrated by actor Kate Mara. Drawing on the video evidence the lawsuit alleges that Dick Van Dam Dairy supervisors and staff used violence to control the cows. 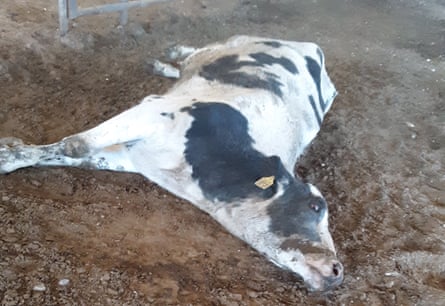 Violent handling tactics listed in the lawsuit include: repeatedly jabbing cows’ faces, legs, and udders with splintered wooden canes and metal pipes; kicking them in the face and udders; tail twisting; and poking fingers in cows’ eyes.

The lawsuit further alleges evidence of teat injuries and blood turning milk pink (which was discarded), and that the bodies of newborn calves were left to decompose.

Contacted by the Guardian, the executive vice-president of co-operative Dairy Farmers of America (DFA), Monica Massey, said the DFA does not tolerate animal abuse and had “ceased accepting any milk” from the Dick Van Dam Dairy.

Massey said milk from the dairy was no longer part of its products, DairyPure and TruMoo, and added that although Dick Van Dam was not a DFA member, it had “supplied small amounts of milk” to a California DFA processing facility.

In an email, the Van Dam family lawyer, Stephen Larson, described the allegations as “manufactured and false”. He said the “so-called” Animal Legal Defense Fund “waited nearly a year to even file this publicity-driven lawsuit, which belies their claims of any animals being endangered. The videos and pictures were either staged or are taken wholly out of context, and we look forward to the truth coming out in this lawsuit”.

The USDA, the USDA’s Food Safety and Inspection Service, and the USDA’s National Organic Program did not respond to requests for comment on either investigation.

A Seed spokesperson said the USDA had confirmed that its Office of Inspector General was investigating the animal cruelty charges at ECDS.

Sign up for the Animals farmed monthly update to get a roundup of the best farming and food stories across the world and keep up with our investigations. You can send us your stories and thoughts at animalsfarmed@theguardian.com

‘Go grab a rifle’: Barnaby Joyce says the only way to meet methane reduction targets is to start shooting cattle

Net zero is not enough – we need to build a nature-positive future | Frans Timmermans, Achim Steiner and Sandrine Dixson-Decleve

‘Go grab a rifle’: Barnaby Joyce says the only way to meet methane reduction targets is to start shooting cattle