How do you deal with 9m tonnes of suffocating seaweed?

The Great Atlantic Sargassum Belt, first detected by Nasa observation satellites in 2011 and now known to be the world’s largest bloom of seaweed, stretches for 5,500 miles (8,850km) from the Gulf of Mexico to the western coast of Africa.

Millions of tonnes of floating Sargassum seaweed in coastal waters smother fragile seagrass habitats, suffocate coral reefs and harm fisheries. And once washed ashore on Mexican and Caribbean beaches, this foul-smelling, rotting seaweed goes on to devastate the tourist industry, prevent turtles from nesting and damage coastal ecosystems, while releasing hydrogen sulphide and other toxic gases as it decomposes.

Seaweed blooms are exacerbated by fertilisers washing into the ocean, as well as by warming sea temperatures. “Sargassum blooms on the Atlantic gyre [tidal current] have got much worse in recent years partly due to increasing intensive agriculture discharging fertiliser into the sea via rivers such as the Mississippi and Amazon,” says Prof Mike Allen, of the University of Exeter and Plymouth Marine Laboratory. “Fertiliser makes the seaweed grow faster and this influx of biomass just shouldn’t be there in that abundance – it’s out of control.” In May this year, 8.7m tonnes of Sargassum were observed across the Atlantic. 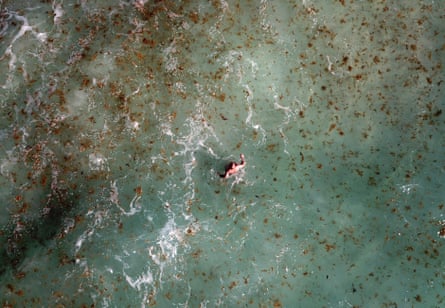 Allen is part of a research team led by the universities of Exeter and Bath that believes it may have found a way to transform this environmental mess into a golden economic opportunity – by developing a cheap and simple way to pre-process seaweed on an industrial scale before converting it into high-quality, low-cost sustainable fertiliser, fuels and chemicals.

“It’s free and there’s so much of it, so it makes sense to convert it into useful products,” says Allen. “But converting marine biomass like seaweed usually requires removing it from salt water, washing it in fresh water and drying it. That’s very expensive, so we needed to find a method that would be both economically and environmentally viable.” 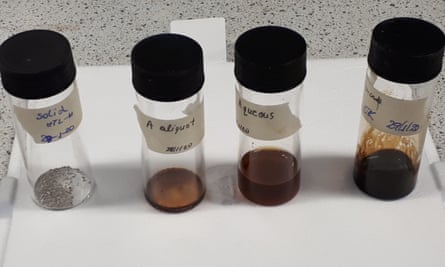 His team has devised an initial “fractionation” or separation process that provides “a crucial missing step towards creating a true salt-based marine biorefinery” by using acidic and alkaline catalysts to break down the salty seaweed. The sugars produced can be used to feed a yeast that produces a palm oil substitute, while the remaining seaweed biomass is then ready to be subjected to extremely high temperature and pressure in a process called hydrothermal liquefaction (HTL), and split into different products. The resulting liquid bio-oil can be processed further into fuel and an aqueous, nutrient-rich fertiliser precursor, while heavy metals that are potentially recyclable are separated into a solid char, and carbon dioxide can be captured.

But harvesting huge volumes of seaweed poses huge challenges. “The timings, sizes and exact locations of these seaweed blooms are unpredictable, plus its composition changes daily as it rots,” explains Prof Chris Chuck, the project’s lead chemical engineer at the University of Bath. “So we need versatile technology to cope with the heterogeneous nature of the material. Just as the crude oil industry creates liquid fuel, plastics and fertilisers, we can benefit from similar flexibility. By altering the conditions to produce different amounts of specific by-products, we can meet variable demand.”

With HTL, even plastic waste and dead animals found entangled among the seaweed can be converted. 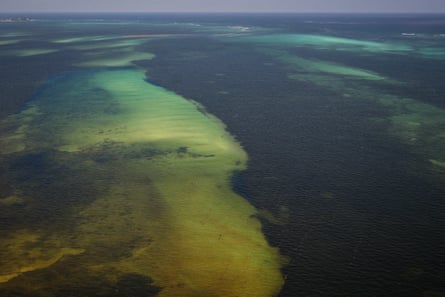 The inspiration for the project came from Allen’s children, Rosie, 12, and Archie, nine, who helped him collect seaweed samples for trial studies along England’s south Devon coast. “While we were painstakingly removing fishing gear entwined around the seaweed, Rosie asked me: ‘Dad, can’t you just convert the plastics alongside the seaweed?'” remembers Allen. “At first, we thought it was a silly idea, but her comment triggered a stream of research and now we embrace the plastic.”

Across the Caribbean, scientists are developing alternative sustainable solutions to this golden tide. Dr Jayaraj Jayaraman, professor of biotechnology and plant microbiology at the University of the West Indies in St Augustine, Trinidad and Tobago, is formulating biofertiliser and other products – due to be ready for commercialisation within two years. He proposes harvesting Sargassum from the surface of the sea before it rots on the beaches and becomes harder to clean, but acknowledges that this is “a very expensive operation”.

In the open ocean, Sargassum provides a valuable habitat for breeding fish and other marine life, according to Dr Debbie Bartlett, ecologist and principal lecturer in environmental conservation at the University of Greenwich in south London. “The removal of seaweed before it reaches shore would require an assessment of risks to wildlife, such as turtles. Collection at sea could harm wildlife, but also any boom installed to keep the seaweed from landing on beaches can easily be damaged during hurricane season,” says Bartlett, who is investigating the potential use of Sargassum found on the beaches of the Turks and Caicos Islands for biogas production and composting using anaerobic digestion.

Initial results indicate biogas production is unlikely to be an ideal solution, and Bartlett explains that because most foods are imported to the Turks and Caicos Islands, demand for seaweed-based compost would be limited to ornamental gardens around hotels. “It’s incredibly complicated. There’s no joined-up approach and we’re unlikely to get one because there are so many different countries involved.”

This enormous amount of biomass is devastating the tourist industry, economy and environment

Bartlett recently found that the bloom is a mix of different variants of Sargassum. “The mixed mats of seaweed comprise three different ‘morphotypes’, each with its own chemical makeup,” explains Bartlett. “To convert it effectively, we need to know how much of each one is present in the mix and how each one reacts to processing.” Researchers at the University of Greenwich also found that the possible presence of marine pollutants such as arsenic and other heavy metals in Sargassum samples may make the seaweed unsuitable for food or pharmaceuticals and warned that use in feed and fertilisers should be limited.

But Allen and Chuck argue that they don’t face these problems because they can convert a variable biomass. “This enormous amount of biomass is devastating the tourist industry, economy and environment, but we’re creating a more circular economy by recycling those nutrients back into a renewably sourced fertiliser and products that could displace crude oil,” says Chuck, who is estimating the costs of scaling up the operation while carrying out trials with a Mexican fertiliser company to test the efficacy of fertilisers made using Sargassum. “If we can get the economics right, we’re looking to commercialise rapidly.” 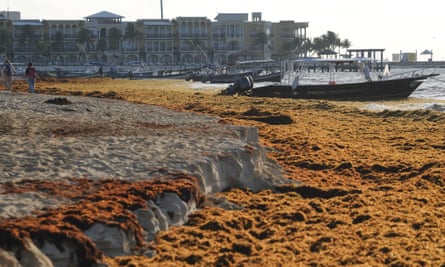 There is a massive international effort to fix these seaweed invasions because of their impact on tourism, particularly in Mexico. But if Sargassum gets collected at sea, perhaps by mobile processing units or a tanker with a biorefinery on board, Allen believes that investment wouldn’t be so forthcoming and that more international cooperation would be required.

Wave Crookes, co-founder of SeaGrown, the UK’s first large-scale commercial seaweed farm, is excited by the proposed technology: “Seaweed is so versatile, and this Sargassum is a good natural resource, but the practicalities of using it are not easy.

“Developing a biorefinery at sea is a good option. It makes perfect sense to take out the high-value compounds before you end up with other products such as bio-char and fuels, if it can be made financially viable without harm to the wildlife feeding in or breeding on the floating Sargassum. But obviously, there are key challenges when it comes to predictability, repeatability and ownership of the seaweed.”

If these obstacles can be overcome, Allen and Chuck’s team believes there is enormous scope for the technology to have many environmental applications. “We’ve created a suite of solutions that can be deployed globally at different locations for different purposes,” says Allen, who argues that the methods could potentially be used to tackle plastic pollution on beaches, clear up invasive water hyacinth in Lake Victoria, Africa, and eliminate heavy-metal contaminants such as those in the lakes around Hanoi in Vietnam.

But with reports that another 500 tonnes of Sargassum hit Mexican beaches in storms earlier this month, the seaweed is the first threat to tackle.

Find more age of extinction coverage here, and follow biodiversity reporters Phoebe Weston and Patrick Greenfield on Twitter for all the latest news and features

Britain could be taking the lead in tackling the climate crisis. Where’s the ambition? | Keir Starmer

Firm seeks funding for ‘performance sneakers’ made from coffee waste

Britain could be taking the lead in tackling the climate crisis. Where’s the ambition? | Keir Starmer

Firm seeks funding for ‘performance sneakers’ made from coffee waste