Ban burning and burying of animals in US Covid-19 farm culls, NGOs urge

As the row over mass animal cullings in the US continues, public and environmental health NGOs are asking the government to ban two livestock carcass disposal methods – burying in unlined pits and burning in open air pyres – until the Covid-19 pandemic is “resolved”.

Risks to the public from the methods, say the groups, include increased air pollutants such as carcinogenic compounds, or bacterial and fecal matter leaking into local water ways.

The coronavirus crisis has hit the US’s largest slaughterhouses particularly hard. As a result, there is a lack of slaughter capacity, and farmers are being forced to cull their animals on-farm.

About 10 million hens have already been killed and the pork industry warned in May that 10 million pigs could die by September.

“Right now, one analyst says 2.1 million hogs have ‘disappeared,’” Grooms said. “We know those all weren’t euthanised, because we heard countless stories from across the US where pork producers were working on innovative ways to keep pigs in the food supply, including donations to food banks and private sales to individuals who wanted to have that closer connection to their food.”

Jim Monroe, the spokesperson for the National Pork Producers Council (NPPC), called the petition, filed with the US Department of Agriculture and Animal and Plant Health Inspection Service (USDA-APHIS), on 29 June by NGOs including Center for Biological Diversity, Earthjustice and the Natural Resources Defense Council (NRDC), “an attempt by anti-livestock agriculture activist groups to use an unprecedented crisis to pile on hard-working farmers during a very challenging time”.

Monroe said: “Pork producers follow all appropriate human health and environmental protocols for safe disposal and have been working with federal and state authorities to address this crisis since it started.”

The NGOs fear that “under-regulated and poorly monitored animal disposal during the pandemic” will create serious public health risks. Where animals are incinerated on farms, “on-site incineration by pyre” risks exacerbating the air pollution, which is “a factor linked to higher Covid-19 death rates.”

For unlined burials, where there is no barrier between animal carcasses and the soil, “there are health risks from bacteria and fecal matter leaking into the water table,” said Hannah Connor, a senior attorney with the Center for Biological Diversity. 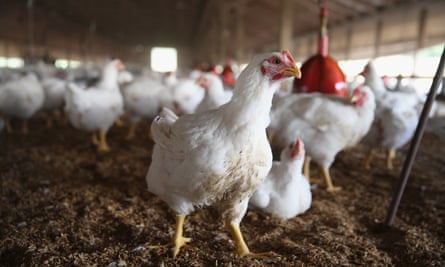 To make it easy for people to find out if carcasses are buried or burned near homes or water supplies, the petition asks APHIS to create an “electronically searchable and sortable database”.

Culling methods prior to disposal are another problem. “A lot depends on how animals are culled [in terms of environmental impact],” said Connor. “If pigs are shot, there are concerns about lead getting into the environment and the water.”

For chickens, said Connor, one of the main cull methods is foaming. “Foam can have PFAS in it, that’s the family of chemicals that includes PFOA and PFOS. PFAS chemicals are linked to a range of health issues including cancers, kidney problems and suppressed immune systems.”

Per- and polyfluoroalkyl substances, or PFAS, are sometimes called “forever chemicals”. A recent film, Dark Water, inspired by a true story, portrays the damage done by PFOS to people in the West Virginia town of Parkersburg, starting in the 1950s. The PFOS, or C8, was used in the manufacture of Teflon.

“These chemicals are harmful even in extremely low levels and very persistent in the environment,” said the senior NRDC attorney Valerie Baron.

Neither the American Medical Veterinary Association (AVMA), which publishes depopulation guidelines, nor USDA-APHIS replied to questions about PFAS in foams used for depopulation. Nor was there an immediate response from chicken trade body, Delmarva Poultry Industry (DPI). DPI has previously been unresponsive to questions about culls and methods.

NRDC staff scientist Anna Reade said “nothing prevents industrial animal producers from using PFAS containing foam, which is firefighting foam, for poultry depopulation, and we have heard reports it is happening. Most foams on the US market contain PFAS.”

The USDA-APHIS spokesperson did confirm it received the petition. They said the department “will look into it. At this time, that’s all of the information we have available.”

The petition gives USDA-APHIS seven days to respond. If nothing is done by then, Connor said the NGOs will consider going to court.

In a separate US development, 12 animal activists are facing charges including burglary and misdemeanours related to a recent undercover video investigation of a mass pig cull in Iowa using an approved cull method called Ventilator Shutdown Plus (VSD+). The method involved shutting down pig shed ventilation and introducing steam to cause death by hyperthermia.

On 19 June, local Iowa paper the Des Moines Register reported that the pork producer where animal rights organisation DxE said it filmed the VSD cull had stopped using the method. The producer did not respond to emailed questions or calls.

Send us your stories and thoughts at animalsfarmed@theguardian.com

o This article was amended on 30 June 2020 to correct references to PFOA chemicals when PFOS was meant.

The Guardian view on green finance: doing business as if the planet mattered | Editorial

The Guardian view on green finance: doing business as if the planet mattered | Editorial